Andreas Grimm and Adrian Rosenfeld are pleased to announce, Lisa Tan, the first exhibition in their newly relocated gallery at 530 West 25th street, second floor. This will be the New York-based artist’s first solo show in New York. Using sculpture, photography, drawing, and installation, Tan’s art practice distills issues of relationships, reciprocity, and intimacy into a concise formalism-turning experiences into objects. The exhibition will feature a new series of color photographs and an installation entitled “Philodendron Propagation.”

In her photographic series of books, Tan presents two copies of the same book, one belonging to her and the other to her current boyfriend. Documenting places where their individual libraries overlap, the images feature pairs of worn copies of such books as Joseph Conrad’s “Heart of Darkness,” (now “Two Hearts of Darkness” (2006)) and Jean Francois Lyotard’s “The Postmodern Condition: A Report on Knowledge” (now “Two Postmodern Conditions” (2006)). The works play off of their own coupling, and while deeply personal, the series also functions as a representation of how taste, culture and values inform relationships.

Tan’s work was recently featured in Artforum as a part of the annual “First Take” issue. Christian Rattemeyer writes: "If relational aesthetics is about the sociology of human interactions, then Tan’s aesthetics of relationships is about the economy of human intimacy, a romantic conceptualism grounded in the investigation of emotional drives….Her work introduces a timely sense of personal emotional investment at a moment when sentiment is being rediscovered in the histories of Conceptual art.”

For One Night Stand, New York-based artist Lisa Tan travels to a major international city, in this instance Paris, for a night, taking only a notebook and a change of clothes. Documenting the experience through the task of writing (as inspired by the “nouveau roman” style particular to names such as Alain Robbe-Grillet), One Night Stand is an opportunity to see the world through an intimate lens.

Text that mimics the strategies of image captions features prominently in the projected work, however, here these texts lack their visual support. The passing standardized subtitles are derived from Tan’s writing during her trip, and float in a projected field of monochromatic black that is devoid of moving image. This form of representation – both literally descriptive and visually oblique – competes with a myriad of easily conjured iconic images of Paris as experienced by a history of representation through film and photography. Willfully dislocating and disorienting herself,

Tan observes the city’s surfaces, evoking her voyeuristic connection to the environment. In this way, Tan’s intention is to see how words themselves become iconic, and how they can support a vision of the intangible feelings associated with place through personal memoirs.

A site-specific sculptural installation Roman Lovers that includes a lamppost, plant and wrought-iron fence will complement the silent, moving textual installation. This environment is restaged from a photograph and engages the significance of both photographic memory and psycho-social projection, while investing mnemonic and emotional importance into inanimate objects. This urban moment is captured photographically and then theatricalized in the space of the gallery—the installation representing a cross-section of urban space as well as a psychological moment of suspension and longing. 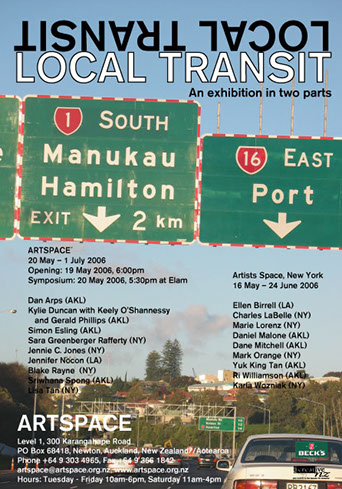 ARTSPACE presents Local Transit, an exhibition of two parts jointly organised by Artists Space, New York and ARTSPACE, Auckland.  Local Transit alludes to the question of translations and readings/misreadings. What does it mean to be in New York compared to Auckland or Los Angeles? Does being in a perceived geographical periphery such as Auckland presuppose “misreadings” of dominant trends? And does New York’s cultural status decide the conversation and presume only “readings”?

Co-curated by Artists Space Curator Christian Rattemeyer and ARTSPACE Director Brian Butler, Local Transit originates from the recognition of the two institutions’ similar history, size and role in their respective communities. Through an exchange of artists the project investigates the role of familiarity and difference in the reading of contemporary art. The exhibition occurs concurrently in Auckland and New York. In each location a different group of artists has been selected: four Aucklanders, four New Yorkers and one Angelino.  All the artists hail from port cities. Traditionally, port cities are free cities with a lack of control in what passes through and enters the port. They are cities open to communication, language and translation where ideas flow and meanings are difficult to fix.