With a title drawn from a short story by Susan Sontag, Archaeology of Longing is an exhibition bringing together a number of artworks, artifacts, and common objects. It begins as an investigation into disenchantment, soon digressing through the historical flatlands of interpretation and substitution. Far from melancholic, and closer to what can be described as politically intimate, the exhibition is an inventory of that journey. Archaeology of Longing includes artwork by Alejandro Cesarco, Luca Frei, Emma Hedditch, Bethan Huws, Fabio Kacero, Rober Racine, Kay Rosen, Kateřina Šedá, Joe Scanlan and Lisa Tan; artifacts and objects on loan by several contributors, including Tania Bruguera and Archives Erik Satie; and exhibition furniture designed by Tomás Alonso. A series of events will take place as part of the exhibition. On the evening of September 18th, Luca Frei makes a reading of his book The so-called utopia of the centre beaubourg – An interprétation, and Emma Hedditch performs a new work at the Musée de Montmartre in Paris. On the night of November 1st, Lars Svendsen gives a lecture on his Philosophy of Boredom at Kadist Art Foundation. A collection of findings uncovered during the archaeology of longing is also available as a publication titled 84 handkerchiefs, an umbrella and some books.

In her drawings, sculptures and collages, Katarina Burin (born Slovakia 1976) delves into the history of architecture and design, both famous and commonplace, with an eye to how images and documents both represent the past and live in the world today.

For Ambassador Suites, she plays on common emblems of the city: storefronts and display windows. Inspired by a mysterious window display at an “Import/Export” business in a neighboring street in Paris, Burin assembled different bodies of work in a loose evocation of a travel agency. Imbedded in this idea is not only “travel” but “tourism” and the selling of leisure. For the window of the gallery, Burin designed a multi-part screen structure, combining fragments of imagery with replicas of building models from the other storefront. The forms of the screens are mimicked in the Leisure Ensembles, sculptural shelves that present found images as both movable and interwoven. Upstairs, drawings made by hand spraying ink through stencils, recreate images from hotel and leisure industry matchbooks.

At the same time Burin has curated the work of two other artists into her conception of travel, advertising and tourism. Josh Shaddock (born 1973), living in New York, shows the piece Red White and Blue, 24 flags from sovereign countries that have those colors. Using a common symbol that is imbued with political and social meaning, he strips the content out of the piece, attributing to it a set of formal criteria, simplifying and yet confusing our usual read. The New York based artist Lisa Tan (born 1973) shows a piece from the series Baudelaire Itineraries in which texts by the author are appropriated to provide destinations for proposed journeys. She will also show a new video of mountain images taken from National Geographic magazine alongside their corresponding back pages, literalizing a metaphoric passage from front to back.

D’Amelio Terras is pleased to present “Moving a Mountain”, a Front Room exhibition by artist Lisa Tan. Works on display are a result of a trip Tan made from New York to Mexico City in November 2007. Tan’s fleeting journeys often provide an impetus for her work, which attempts to poetically encapsulate where desire and melancholia meet. This trip to Mexico City, coinciding with the Day of The Dead holiday, became a quiet discovery on what the artist found to be living.

Tan pays particular attention to the properties of midnight in a foreign city, a combination she believes to produce a ripe sense of dislocation and heightened observation. At midnight in Mexico City, while she overhears (and voyeuristically listens to) her hotel neighbors, Tan studies a painting of a mountain hung in her room and thinks of her own state of being. Taking detailed notes and photographs, but unable to discard the thought of the painting of the mountain, the artist concludes the journey months later when she returns to Mexico City to leave a trace of herself that will remain in the hotel room she once occupied.

Sourcing from texts and novels, the artists translate written originals in many different ways - culturally, media-based, using language, and from one genre into another. In doing so they focus on the significance of the individual – with regard to himself and ‘others’ as a being influenced by emotions and intellect. In the course of this ‘discovery of the individual’ pursued by ‘Sturm und Drang’ authors in the 18th century, artists question the link between the particular text content and its aesthetic and formal representation. Indebted to the idea of “Romantic Conceptualism” the works stand out for the interaction between the usually accepted contradiction of emotionality and conceptual rationalism.

In the film “T.S.O.Y.W.”, produced for the 2008 Whitney Biennial, AMY GRANAT and DREW HEITZLER accompany a modern day ‘Werther’ from Goethe’s novel “The Sorrows of Young Werther” - through the American desert. Following Jean Genet’s advice to substitute his unrequited love for Charlotte with a motorbike, Werther embarks on an aimless trip through the desert on a motorbike stolen from a friend, which takes him past icons of Land Art throughout the USA. In their debut collaboration, Amy Granat and Drew Heitzler filmed in parallel, but each utilizing their individual characteristic film language to capture the same scenes. Presented as a dual projection the infinite expanse of the landscape becomes the melancholic scenery of Werther’s search, which goes hand in hand with this breaking loose from conventional forms. Ultimately he disappears in the disappearing images of the movie.

As in “The Sorrows of Young Werther”,

Letters often represent traces of a relationship, its emotional entanglement and projections. LISA TAN, whose minimalist art works explore her relationships with people and the associated emotions, allows relationship and loss to be the subject of imagination in her work “Letter Never to Arrive”, a photograph of an envelope with an illegible address written on it. Another series of photographs shows in each case two covers of the same book, which reveal different traces of use, and which are mostly different editions. This represents a collection of books which, after someone has moved in with a loved one, they now own twice, and is as such a reflection of their spiritual bond. In ‘word counting pieces’ she counts how many times central, emotional terms such as ‘love’ and ‘death’ appear in books such as Maurice Blanchot’s “Death Sentence” or Alberto Moravia’s “Contempt”, thereby questioning, among other things, the connection between language and sentiment.

In the mural he created for the exhibition, JULIEN AUDEBERT references Adolf Loos’ text “Ornament and Crime”, in which the architect polemically discusses the overcoming of the ornamental as aesthetic and economic progress, thereby countering the general aesthetic taste of his time with an individual stance. Julien Audebert also takes up the investigation of terms that lend themselves as titles, though he focuses on the aesthetical quality of the text, by, based on their occurrence in Loos’ text, stamping the enlarged words “ornament” and “crime” on the wall as a sort of ornamental embellishment. A corresponding piece consists of a wooden plank painted such that it imitates wood. With this doubling up Julien Audebert satirizes Loos’ verdict that wood can be painted in any color save the color of wood, for that indeed is “ornamental crime”. 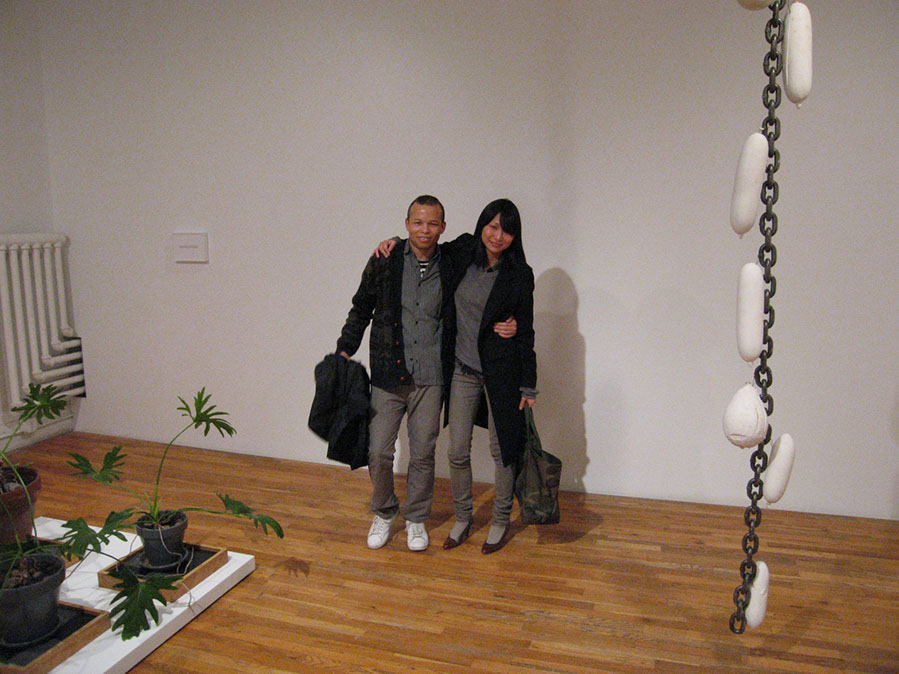 Nina In Position presents diverse artistic strategies that complicate the legibility of lack and difference in America. The selected artworks employ Walter Benjamin’s assertion, “To live is to leave traces,” as a platform from which to view and critique the body and its environs. Occupying Artists Space’s main gallery with a series of sculptural and post-sculptural gestures, Nina In Position reveals emancipated forms that, through their inherent deviance, function as “resistance to regimes of the normal.” Nina In Position is an attempt to articulate a new trajectory of sculptural encounters that rebel against the condition described by Benjamin as “Left Melancholia.” The exhibition’s curatorial focus aims to unlock the ways in which artistic exercises, histories, and narratives are re-signified within contemporary visual culture.

Nina celebrates objects borne through experimentation and insight rather than aca- demic metaphor. Here, post-sculptural gestures evade the normalized limitations of sculpture as “objects” and allow sculpture to resonate past traditional constructions, techniques and expectations. The exhibition considers dialogic identities – “Us and Them” – and the ramifications of exclusionary practices that have caused disrupting reverberations throughout the margins in America. It is the aim of Nina to establish a bridge between decades of artistic practice and recalibrate a trajectory of sculptural meaning. 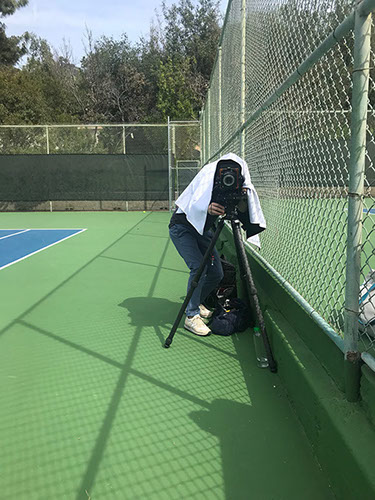 The World Is All That Is The Case

1. The world is all that is the case.

1.1 The world is the totality of facts, not of things.

1.11 The world is determined by the facts, and by their being all the facts.

1.12 For the totality of facts determines what is the case, and also whatever is not the case.

1.13 The facts in logical space are the world.

1.2 The world divides into facts.

Variation A: Replace “The world” with “photographs”

1. Photographs are all that is the case.

1.1 Photographs are the totality of facts, not of things.

1.11 Photographs are determined by the facts, and by their being all the facts.

1.12 For the totality of facts determines what is the case, and also whatever is not the case.

1.13 The facts in logical space are photographs.

Variation B: Replace “facts” with “photographs”

1. The world is all that is the case.

1.1 The world is the totality of photographs, not of things.

1.11 The world is determined by photographs, and by their being all photographs.

1.12 For the totality of photographs determines what is the case, and also whatever is not the case.

1.13 Photographs in logical space are the world.

1.2 The world divides into photographs.